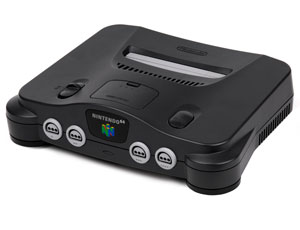 With the 64-bit power of the Nintendo 64, players can explore breathtaking 3D worlds that explode with colour, dance with real-time lighting effects, and light up your ears with CD-quality sound.

The Nintendo 64 was designed as a party machine, with four controller ports just begging to be filled. Get together with three friends and experience how astounding games like Mario Kart 64, Mario Party, and Donkey Kong 64 can blossom into laugh-a-minute multiplayer gameplay marathons.

A line-up of seven stunning, semi-transparent colours – blue, green, orange, purple, red, black, and clear blue – plus a plain black Nintendo 64, an exclusive Pokémon Special Edition that's coloured yellow and blue and features a great big Pikachu on the top, and, released only as part of the Super Mario 64 pack, a stunning turquoise and eggshell console – take your pick.

With the aid of the Transfer Pak (sold separately), the Nintendo 64 can communicate with Game Boy Color games like Pokémon Gold/Silver and Mario Golf. Depending on the game, you'll be able to exchange data, unlock secrets and minigames, and even play your Pokémon titles up on the big screen!

Breaking new ground in input device design, Nintendo devised the first analogue control stick for the Nintendo 64 controller, blessing gamers with complete 360-degree control of every game. The unique three-pronged design moulds perfectly into your hand, and 13 other buttons – including a handy Z button below centre – round off this pioneering package.

Over the years, the Nintendo 64 has become the natural home for instant A-grade classics. From the world-changing Miyamoto launch title Super Mario 64 to the immersive The Legend of Zelda: Ocarina of Time, this console's collection of over 300 games has sheer quality running right through it. The Legend of Zelda: Majora's Mask, Mario Tennis, Mario Kart 64, Donkey Kong 64, Paper Mario, GoldenEye 007 – the list is almost endless, and takes in every single game genre.

The name is Bond. James Bond. The famous hero of Ian Fleming's novels returns in this first-person shooter, which is based on the movie of the same name. Agent 007 and his friend Alec Trevalyan (a.k.a. Agent 006) were sent to Soviet Union on a secret mission. But everything goes wrong, James Bond barely escapes, and his friend is presumed dead.

The 1997 Formula One World Championship, won by Canadian Jacques Villeneuve in dramatic fashion after a final-race collision with Germany's Michael Schumacher, is recreated in this racing simulation. You have the chance to set up the car to perfect the handling for each of the 17 diverse circuits. Wet racing is incorporated, with gradual weather chances, as well as tyre wear requiring pitstops.